Units of Capacitance: The base unit of capacitance is the farad (F). This value is very large for ordinary circuits, so smaller units have been made for measuring general purpose capacitors.

+ or – sign: If you see one of these next to a terminal, the capacitor is polarized. Always connect capacitor’s + end to the positive side of the circuit, or the capacitor could eventually cause a short or even explode. If there is no + or -, you can orient the capacitor either way.Some capacitors use a colored bar or a ring-shaped depression to show polarity.

This mark designates the -ve end on an aluminum electrolytic capacitor. On tantalum electrolytic capacitors (which are very small), this mark designates the + end. But smaller capacitors often have just 2 or three numbers on them? When there are just two numbers,they are read as Pico-Farads. An example: 56 printed on a small disk can be assumed to be 56 Pico-Farads.For three numbers,It is somewhat similar to the resistor code. 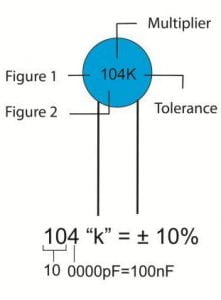 The first two are the 1st and 2nd significant digits and the third is a multiplier code or the number of zeros to write after the first two digits. Now for an example, A capacitor marked 104 is 10 with 4 more zeros or 100,000 pF which is otherwise referred to as a .1 uF capacitor. Sometimes a tolerance code given by a single letter is written, letters on the middle row of keys on a typewriter. So a 103J is a 10,000 pF with +/-5% tolerance. This letter represents the tolerance of the capacitor, meaning how close the actual value of the capacitor can be expected to be to the indicated value of the capacitor. If precision is important in your circuit. 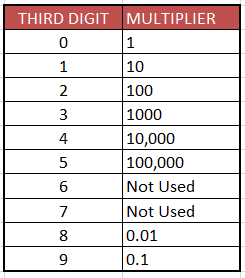 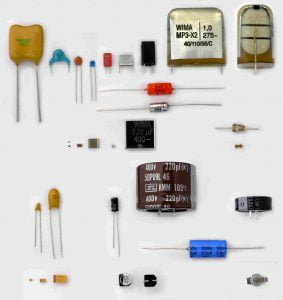